This past weekend my hard drive failed. Saturday night I attempted to turn on my computer and received the all-too-familiar message "DISK BOOT FAILURE, INSERT SYSTEM DISK AND PRESS ENTER" which is quite annoying. I immediately suspected my OCZ Agility 2 60 GB solid state drive, only because the same thing happened exactly 7 months and 1 day ago. My BIOS wouldn't even recognize the hard drive, which means it failed pretty hard. 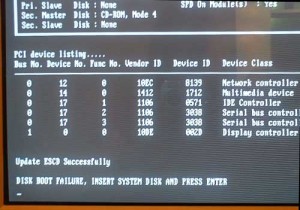 What I had to do exactly 7 months and 1 day ago involved contacting the OCZ customer support website and creating an RMA support ticket. The folks there were not very quick to respond, nor very sympathetic, but I did manage to get an RMA, mail my SSD back and get a "working" SSD about a week later. That drive failed this past weekend, meaning I'll be contacting OCZ support and jumping through their hoops once again (ugh..). So let's just recap how my excellent experiences with these fancy SSD's that seem to be all the rage in this modern world: The results are pretty scary. I could fill up 60 GB of data on that drive and lose all of it every 6 or 7 months. And I did. And it sucked. Am I just unlucky? Did I get two lemons?

Apparently not. Looking at Jeff Atwood's collection of SSD lifespans, it would appear that solid state drives fail pretty often. Here's the numbers he found based on eight SSD's purchased over the last 2 years:

Scary! I have about 8 regular magnetic hard disk drives, some of them over 5 years old, and not one of them has failed me. Is the speed that SSDs bring to the table worth the risk that comes with losing 60 GB of data twice a year? In my situation, yes. Here's what my storage looks like (an incredible diagram, I know): 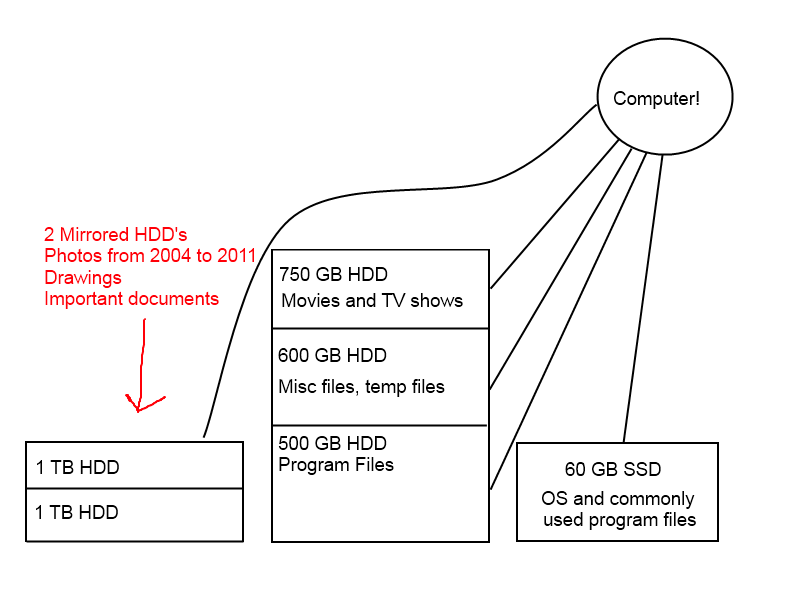 As you can see, the only data that I lose when my SSD fails every 6-7 months is the operating system (Windows 7 Professional) and some commonly used program files (Eclipse, Notepad++, Adobe Lightroom, Adobe Photoshop). All of these can be replaced relatively easily. In fact, I keep the software installers on my 1 TB mirrored hard drives. That's where I store my precious data (photos from a 7 year time span, important documents, saved game files, etc). Windows 7 has a neat disk management tool that allows me to set up mirrored hard drives without too much thinking. The other hard drives that aren't mirrored (and therefore have no redundancy if they were to fail) contain data that would suck to lose, but wouldn't cause me to cry. All of my movies and TV shows can be (slowly) replaced if I really wanted them again, program files can be reinstalled, and the misc files such as  rendered compositions (I do some video editing and CGI work from time to time) can be re-rendered.

So why does my situation still suck? And why is the title of this article a shout-out to Puppy Linux? Because once my SSD dies, I lose my operating system. Without the operating system, I lose easy access to all of these files. My data is safe, but I can't access it. When the drive my OS lived on died, my first instinct was to just re-install the OS somewhere else. But where? All of my hard drives had stuff on them. Stuff that I could lose if necessary, but I didn't want to resort to that. If only I could just get basic access to the files and move some things around... Hmm...

That's where Puppy Linux totally saved the day. I was able to download a 125 MB disk image (.iso) and place it on the USB drive to create a bootable USB "disk". I stuck this USB drive into of my computer and in my BIOS screen, selected the USB drive to boot from. Within a few minutes I had a fully functional operating system (a variant of Linux) which allowed me to see my hard drives and files. If I so desired, I could grab those important documents that were safely backed up on one of my hard drives and transfer them to a USB drive. However my goal was just to delete what wasn't important and relocate what was mildly important to another drive, thereby freeing up an entire HDD so I could install Windows 7 onto it. If I didn't have any desire to do some gaming I could have just used the Puppy Linux OS (running from the USB drive) for the next week or so while I wait for OCZ to send me a replacement SSD.

I tried a bunch of different ways of inserting that magical code that allowed the USB drive to be "bootable" without much luck. Fortunately I found UNetBootin to streamline the entire process of creating a bootable USB drive and it worked perfectly for me.

Although I didn't really need to open up my computer, I wanted to make sure that my SATA cable or port wasn't the culprit. Indeed it was the SSD. I also disconnected my "precious data" completely so I wouldn't accidentally reformat that." 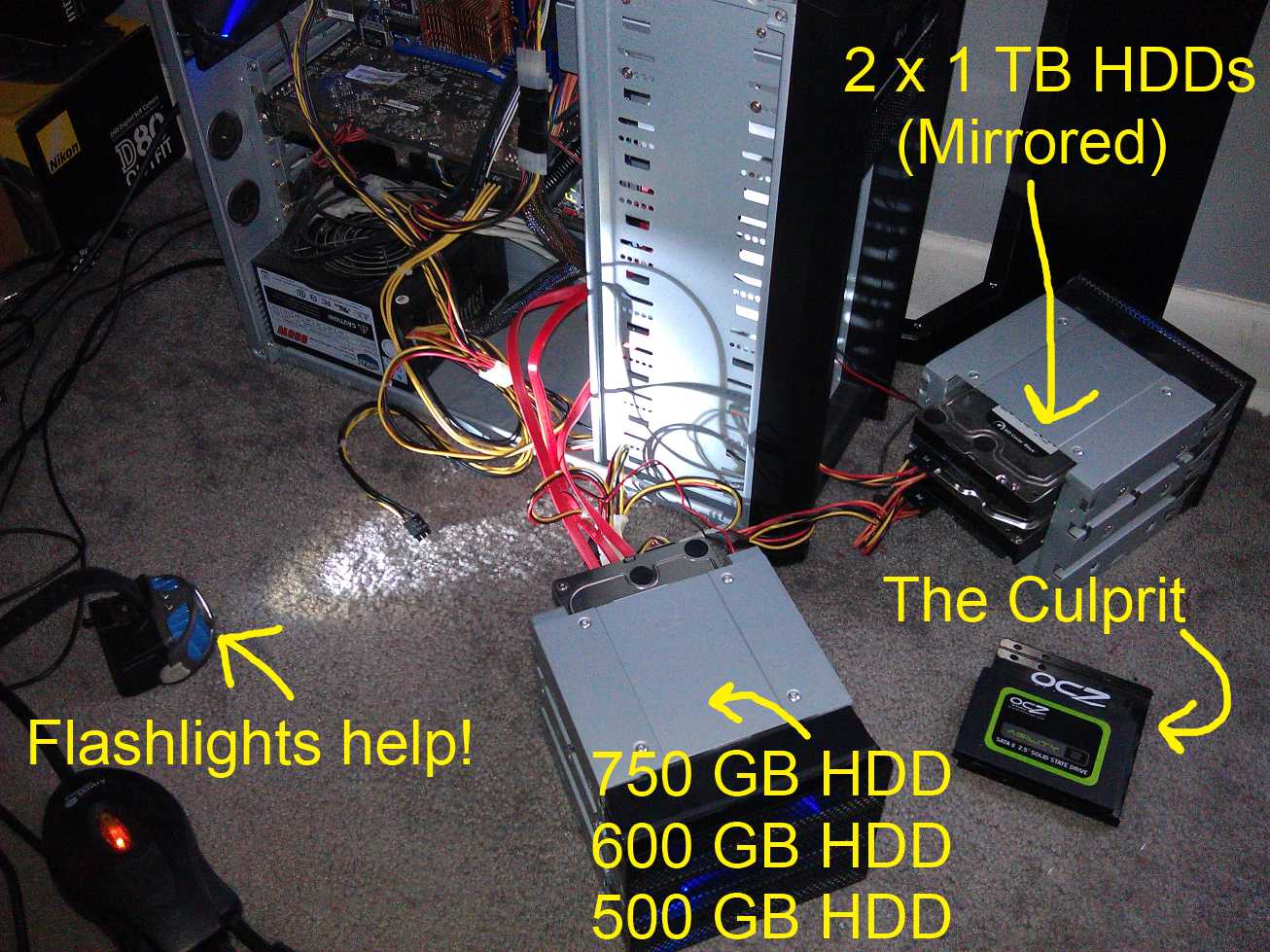 Next time your operating system or a hard drive fails, consider booting from an OS that lives on your USB drive. You'll be able to access your hard drives and recover your  files so long as they are not corrupted.

So I just want to say a big thank you to Puppy Linux, a big thank you to the fine folks who wrote UNetBootin, and a disappointing "ughhhhhghghghggh" to OCZ who have twice been unsympathetic and very slow to help me with their faulty solid state drives.

Months after publishing this post, I have found this recent article describing the inner workings of SSDs to be very enlightening. After reading it, I'm surprised OCZ even offers a 2 year warranty.

Are you teaching yourself how to program and write code? Or do you have extra time to kill and want to brush up on your skills? Did you already make the "Hello