Let's take a quick count of all the ways we can send instant messages via Google products:

Some of these sound pretty similar. Why am I listing the chat bar in Gmail as a separate item as the chat bar in Google+? Because they are separate. They hold different contacts. As an example, here are the two chat screens, logged in from the same account and captured at the same moment in time.

Why aren't these the same!? I'm sure someone at Google has a good reason for this, but it still leaves me in an awkward position when I want to chat with someone. What if I am browsing Google+ and have the urge to instant message my friend about the latest picture of a hat-wearing cat that he just shared? Taking a quick look at the chat sidebar I see that he's not online. Oh, too bad, I think to myself. But a few minutes later I am switch back to Gmail and see that he is online. What the heck? Why do I have more friends to talk to on Gmail than I do on Google+? Some of the chats carry over from Gmail to Google+ (such as if I have two browser tabs or windows open, one on each service) so it seems like they are... sort of integrated? Maybe?

Okay that is weird. What about the Google Talk app?

Let's think of another common situation: I'm on my phone's Google Talk app to chat with friends, and I want to share a picture. I use Google Talk instead of traditional SMS text messages very frequently. But when I am sending text messages, I have the option of sending MMS picture messages. This is all handled very seamlessly and isn't too big of a deal. But when I am using my phone's Google Talk app to chat, how the  heck do I send a picture? Let's think. I could: 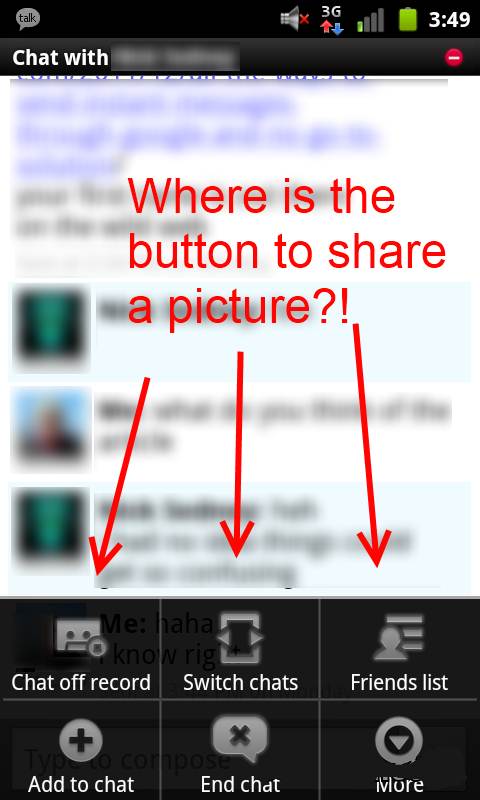 Why is this so difficult? An easy choice would be to send an email with an attachment. After all, if the person is on Google Talk they are probably on Gmail, right? Maybe not so, as you can have the Google+ page open to chat, without having a Gmail page open. So they might miss the email. It's also not a good choice because many smart phones take 5 or even 8 megapixel pictures. The image that you want to share might be anywhere from 300 KB to 1.5 MB in size. By the time the person finally receives the email with the picture attached, it might be 20 minutes later, and it won't have any context. There's just no simple way of sharing pictures via Google Talk.

Does that mean we should all be communicating via Google Messenger (formerly Huddle) -- the latest and greatest way to communicate?

Google Messenger adds the ability to send group messages and share pictures, besides offering basic one to one instant messaging. Unfortunately you can only use Google Messenger on your mobile phone. Which means I am definitely not going to use it while I am near a computer where I have a large screen and an actual keyboard. And I doubt my friends and contacts will be using it either. It also has no integration with Google Talk or any of the other ways to send instant messages through Google.

The other problem is that all of your friends will probably need to add a second phone number to your contact information, or create a second contact entry for you. What's even more confusing is when your friends go to text you back. Here's what I have to think about each time I try to message my friend Nick: 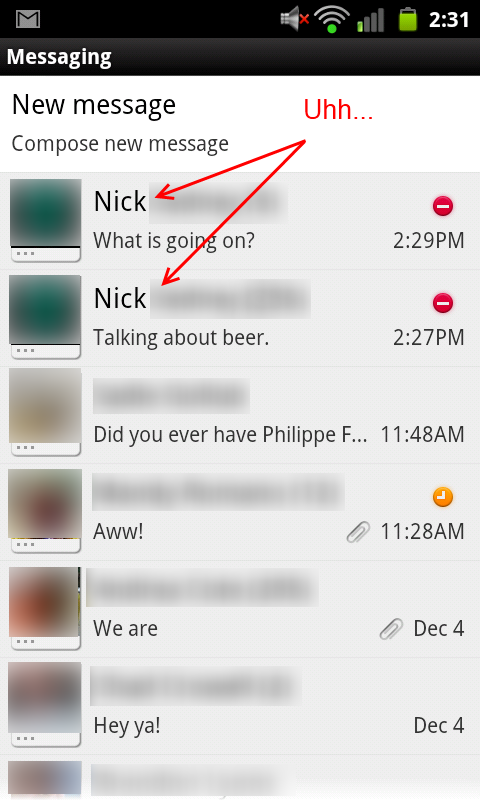 And okay, whatever, I have two entries for Nick. But I have another friend Joe who also uses his regular mobile number to text as well as Google Voice to text. Maybe they use Google Voice for 95% of the time they talk, but sometimes their cell phones may be in a weird reception spot where they don't have 3G access (data access) which is necessary for Google Voice to work, but they have basic GSM service and are able to send SMS text messages. Or maybe they use Google Voice 95% of the time, but want to send a picture message or MMS equivalent. Nope, can't do that in Google Voice. So every now and then I get messages from the same person but may show up on my phone as coming from two different sources and the conversations may be completely unrelated. A couple hours later I have to ask myself: Which conversation thread do I reply to? Should I respond to the Google Voice number? Should I respond to the regular number?

All of this really begs the question.. Why aren't any of these instant message services integrated with each other? How hard can this be?

I'm really not a big Apple fan, but look at what they're doing with iMessage. It seems like they understand what's going on. Google on the other hand keeps introducing new ways to do the same thing thing (with small functional improvements) yet seems to have no desire to make them play nicely with one another.

And please tell me what they were thinking with this Gmail Labs Feature:

Oh a neat Google Labs feature! I can send text messages from Gmail?! 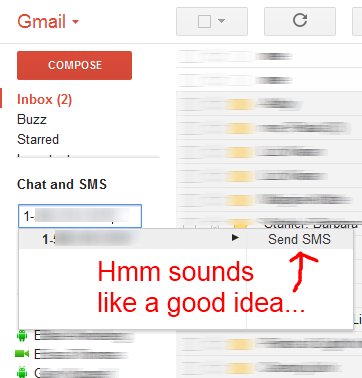 And here's what the recipient sees:

Which really makes me wonder what is going on. I have a Google Voice number, so why not send the text from that number? Instead, it's some random number that seems to generated on the fly. And what is the recipient supposed to do? Text a message back to a random number? Or look, there's an email address. Should the recipient email the person back? What if the sender walks away from their email?They wouldn't have access to that particular gchat anymore, nor would they necessarily have access to an email.

Here's just another Google product that fails to integrate with the rest. Granted this is a "beta" and "labs" feature, but all of these things really make me wonder what is Google's preferred way for us to send instant messages to each other? It seems like each of these products offer some neat functionality that the others lack, but they all  fall short of delivering one easy go-to solution. And that's kind of weird, because having all of my messages in one easily accessible spot seems to align very well the company's corporate mission:

All of this is really unfortunate because I really want to use Google products and services. I like chatting in Gmail, and I tend to use Google Talk on my mobile phone just as often as traditional SMS text message. So Google, please, for the love of this tech-savvy world,  integrate some of your chatting services.

This past weekend my hard drive failed. Saturday night I attempted to turn on my computer and received the all-too-familiar message "DISK BOOT FAILURE, INSERT SYSTEM DISK AND PRESS ENTER" which