Let's take a moment to talk about technology in the consumer space. A few years ago, an exciting little device started popping up. At first it lurked around on the some small tech blogs and action sport forums. Then it moved onto mainstream technology blogs, and once the ball started rolling, I started seeing it on television commercials. I don't even own a television, yet the few times I found myself near a television this thing seemed to show up on every commercial break. Towards the end of last year, there was one GoPro video titled, tagged, and uploaded every minute on YouTube. How did this little device explode into popularity?

Let's talk about what these little 'GoPro' cameras do:

See a theme here? It's crazy flexible. When I was debating purchasing one I thought about all the different use cases and what sort of audiences this camera was being marketed to. It's great for documenting action sports. It's great for people who just want to take some pictures or video underwater. It's great for people who want to add a high-quality video recording unit to their remote controlled airplane. I was thinking it'd be awesome for some time-lapse video because of the built-in intervalometers. Some expensive DSLR's don't even have built in intervalometers! 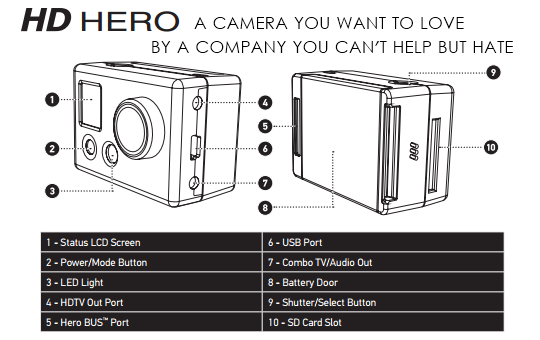 And let's elaborate on the simple to use part. There are two buttons (at least on the second generation unit I had) -- Power and Mode. There's no camera focus to deal with. There's no LCD screen for people to fiddle with composition, and the wide-angle lens means if the camera is pointed at your subject, it's going to be in the shot. The ruggedness factors into the simplicity as well, because I can throw it in my backpack, tie it to a kite, use it in the rain or the leave it near the swimming pool. It requires little thought or worries. It's a brilliant, flexible, easy-to-use, inexpensive device. But I am worried.

Though You Had Strong Hardware and Insane Viral Marketing Success, your Software and Customer Support Failed.

(And Failed in the Most Ridiculous, Absurd, How-The-Hell-Did-This-Get-Past-Your-QA-Department Way)

What's my complaint? Well, as mentioned I was planning on doing some time lapse photography using the built in intervalometer that came with the camera. I was also going on a family vacation the next week, and wanted to try out the underwater video recording in the pool and ocean. So I ordered their newest (at the time) $300 GoPro Hero HD, a chest strap, and a few days later was happily recording video and shooting pictures. Looking at the footage, the quality impressed the hell out of me. I finally understood why everyone wanted HD televisions. The time-lapse footage came out pretty great as well. A big, wide-angle shot, perfect for watching clouds and shadows race across the the screen. But little did I know that with each of these experiments my camera was slowing ticking away, it's life and usefulness decreasing with every single shot. 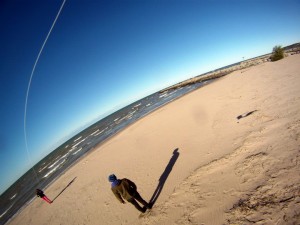 Fast-forward to the end of my vacation. I shot probably 50 or so videos of my family jumping off the diving board into the water and thousands of still images that would later become some neat time lapse segments  I was getting slightly less than ideal battery life which I thought was an okay compromise for all the great shots, but what was really starting to get on my nerves was that I couldn't seem to take more than a couple time lapse photos. I'd set it to the timed image mode, press the shutter button, and it would take a couple photos (I could see the little red light blink), but then it would mysteriously stop. Also, the 3 digit LCD display seemed to be stuck at 999. I saw this before when doing extended time lapses. It meant I had taken over 999 videos or pictures, exceeding the LDC display limit, but when plugged into the computer, I would find my files rolled over like GOPR0999.jpg and then GOPR1000.jpg, GOPR1001.jpg, etc.

Turns out that although it was smart enough to roll over after 999 photos, it wasn't smart enough to roll over a few more times. After some hours of troubleshooting (which included connecting it to the computer, transferring files, reformatting the SD card, trying different SD cards, power cycling the camera, etc) I gave up. I couldn't get it to take any more photos or video. Thankfully it was the last day of my vacation. Although that meant I would miss recording my four year old cousin finally get up the nerve to swim across the pool without floaters, I would have the next couple days alone to get my new camera working again.

Hello I recently purchased a GoPro HD Hero and it worked fine for a few weeks. Now however when I try to set up an image sequence (set to once every 5 seconds), it takes about 8 or 9 photos and then locks up. I cannot turn it off or stop its capture. When I plug it into my computer, I see that there are hundreds of empty folders. Only in the first folder are there about 8 or 9 photos.

I tried powercycling it by taking the battery out and putting it back in. I also wipe out the memory card both via the computer, as well as selecting the 'delete all' option on-camera. Whenever I try to do an image sequence, it just locks up after the first 8 or 9 photos. I am guessing it just starts making empty folders every 5 seconds on the memory card at that point.

I was happy with the product initially, but this is a very frustrating problem. I have missed opportunities to take awesome image sequences. Please advise what I can do about this.

The next day I received this response:

Do you take many time lapse pictures? What may have happened, is you may have encountered a known issue with our current firmware, in which the camera is no longer able to save files after it has taken 9999 images. Could you please let me know what the name of the last successfully captured image was? If this is the case, we would need you to send in your camera, and would reflash your firmware to fix the issue.

Otherwise, what brand/specification of SD card are you using? We have had many users facing issues with less reputable SD card manufacturers, and this could potentially creating the issue. In house we use Kingston and Patriot brand Class 4 or higher SD cards, and can fully recommend these.

Please let me know if this helps.

Many Thanks,
GoPro Support

to which I replied:

Yes, I do take many time lapse pictures. That was one of the reasons why I purchased the camera not too long ago. The last successfully captured image filename is GOPR9999.jpg in the folder 100GOPRO and there are a lot of empty folders such as 101GOPRO and 102GOPRO etc.

I have a Kingston SDHC 16GB Class 4 memory card, which I do not believe is the issue.

Is the only solution to send this camera to you to reflash the firmware? Is this something I cannot do if you send me the firmware and instructions? Is there not a reset button on the camera somewhere?

This is a frustrating experience that the firmware will not let the user take over 9,999 pictures. I do not understand how this is a "known issue" and yet you still shipped me a camera that has such an arbitrary limit to the number of pictures. It is unfair to your customers to sell a camera that only takes XX number of pictures before it needs to get shipped back (on the customer's dime) and "reset" due to a software error.

And here was the last email from them:

I'm sorry for the inconvenience. You are indeed experiencing an issue with our current firmware, in that its internal file counter cannot exceed 9999 and so is unable to save past this point. The only immediate fix we have is to reflash the firmware, which we need you to send the camera in to accomplish.

We are currently completing testing on our latest firmware release, which will fix the issue you are facing. We hope to have this released and available on our website by the end of summer, hopefully sooner, but need to make absolutely sure that image quality in all the new features is preserved. If you are in no hurry, you may elect to wait for this firmware upgrade, and will be notified of its release if you sign up for our newsletter:

Please let me know how you would like to proceed.

Many Thanks,
GoPro Support

And that was it. They wanted me to either pay $20 in shipping to send my new camera across the United States, wait a week without it, just so they could "reset" a software bug and I could take another 9,999 photos. Or my only other option was to sign up for their marketing campaign so I could be notified of a new firmware release which was expected to be due by the end of summer. In troubleshooting this issue and browsing online forums, I noticed that users were complaining of repeated firmware release delays that the GoPro website had boldly advertised for.

What did I do? I quietly cursed at GoPro, paid the $20 in shipping and insurance, spent a week without my new camera, and silently vented my anger and frustration. Well, that was until now, with the publication of this blog post, nearly two years later.

Even though this happened long ago and the GoPro craze has only grown, looking back it still rubs me the wrong way. This is a product that I wanted to love, but made by a company that I cannot trust, and one that seriously shit on its customers.

You do not sell a fucking camera with a software-defined limited number of shots.

Not to a few hundred people, not to a few thousand people, and in no way should you be selling hundreds of thousands of cameras around the world with a critical firmware or software bug that arbitrarily limits the number of photos you can take with it. But GoPro did exactly that. And even though I'll probably get a next generation Hero at some point soon, I'll be calling them assholes in my head as I click the order button, but that's only because there isn't a viable alternative to be seen on the market. Not yet.

But according to the latest reviews on Amazon, it doesn't look like I'm alone at all.

And if you thought it was absurd of them to sell a camera with a 'cap' to the number of photos you could take, they recently tried to use the Digital Millennium Copyright Act to forcibly remove a negative review of one of their products on a website. Yup, that's pretty low.

Ever want to turn a laptop into a webcam surveillance monitoring tool, or use a USB webcam to take pictures every 5 minutes to record a timelapse video? Or maybe you just want